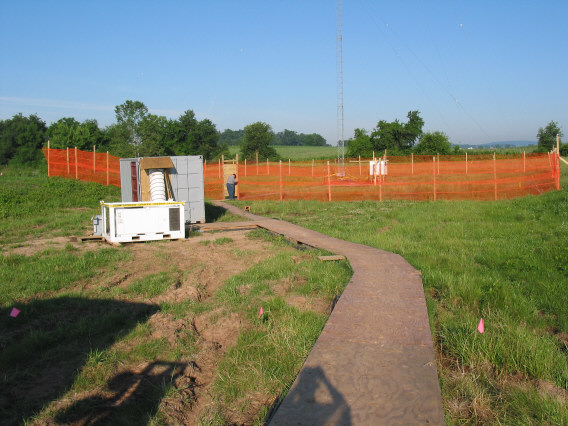 WP3XEN transmitter enclosure, air conditioning unit, and tower fence. A cargo shipping container was pressed into service to house the 10 kW transmitter. Even though the transmitter was a solid-state Harris DX-10, considerable heat was generated during operation. The white unit is an industrial air conditioner which prevented the transmitter from overheating. The pink flags in the grass marked the location of the ground radials. These radials were laid on the surface of the ground, as this was a temporary installation. The wooden walkway served two functions: It allowed easy access to the transmitter enclosure and the tower in rainy weather, as the site became quite muddy when it rained. It also minimized exposure to dog ticks, which were plentiful at this site.